(a) States of matter

1:01 understand the three states of matter in terms of the arrangement, movement and energy of the particles

Arrangement: Particles are close together and regularly packed.

Energy: Particles have less kinetic energy than both liquids and gasses.

Arrangement: Particles are close together but irregular.

Movement: Particles are free to move.

Energy: Particles have less kinetic energy than gasses but more than solids.

Arrangement: Particles are far apart and there are no forces between them.

Movement: Particles are free to move.

Energy: Particles have more kinetic energy than liquids and solids.

Melting: When a solid is heated, the energy makes the particles vibrate fast enough so that the forces of attraction between the particles break. For example   H2O(s) –> H2O(l)

Freezing: When a liquid is cooled, the particles move slow enough so that the forces of attraction between them will hold them into a solid. For example   H2O(l) –> H2O(s)

Boiling: When a liquid is heated strongly, the energy makes the particles move fast enough so that all forces of attraction are broken. For example   H2O(l) –> H2O(g)

Condensing: When a gas is cooled, the particles move slow enough so that the forces of attraction between them will hold them as a liquid. For example   H2O(g) –> H2O(l)

Sublimation: A small number of substances have the ability to change directly from a solid to a gas when heated. For example   CO2(s) –> CO2(g)

1:04 know what is meant by the terms: solvent, solute, solution, saturated solution

When a solid dissolves in a liquid:

1:05 (Triple only) know what is meant by the term solubility in the units g per 100g of solvent

Solubility is defined in terms of the maximum mass of a solute that dissolves in 100g of solvent. The mass depends on the temperature.

For example, the solubility of sodium chloride (NaCl) in water at 25⁰C is about 36g per 100g of water.

1:06 (Triple only) understand how to plot and interpret solubility curves

The solubility of solids changes as temperature changes. This can be plotted on a solubility curve.

The salts shown on this graph are typical: the solubility increases as temperature increases.

For example, the graph above shows that in 100g of water at 50⁰C the maximum mass of potassium nitrate (KNO₃) which will dissolve is 80g.

However, if the temperature were 80⁰C a mass of 160g of potassium nitrate (KNO₃) would dissolve in 100g of water.

1:07 (Triple only) practical: investigate the solubility of a solid in water at a specific temperature 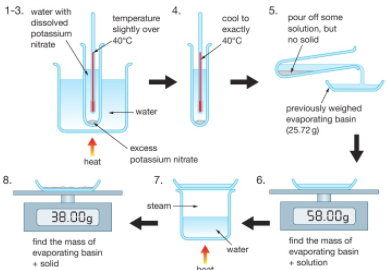 At a chosen temperature (e.g. 40⁰C) a saturated solution is created of potassium nitrate (KNO₃) for example.

Some of this solution (not any residual solid) is poured off and weighed. The water is then evaporated from this solution to leave a residue of potassium nitrate which is then weighed.

The difference between the two measured masses is the mass of evaporated water.

The solubility, in grams per 100g of water, is equal to 100 times the mass of potassium nitrate residue divided by the mass of evaporated water.