The rate of a chemical reaction can be measured either by how quickly reactants are used up or how quickly the products are formed.

The rate of reaction can be calculated using the following equation:

An investigation of the reaction between marble chips and hydrochloric acid: 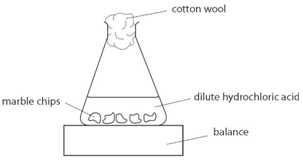 Using the apparatus shown the change in mass of carbon dioxide can be measure with time.

As the marble chips react with the acid, carbon dioxide is given off.

The purpose of the cotton wool is to allow carbon dioxide to escape, but to stop any acid from spraying out.

The mass of carbon dioxide lost is measured at intervals, and a graph is plotted:

Experiment to investigate the effects of changes in surface area of solid on the rate of a reaction:

The experiment is repeated using the exact same quantities of everything but using larger chips. For a given quantity, if the chips are larger then the surface area is lesson. So reaction with the larger chips happens more slowly.

Both sets of results are plotted on the same graph.

Experiment to investigate the effects of changes in concentration of solutions on the rate of a reaction: 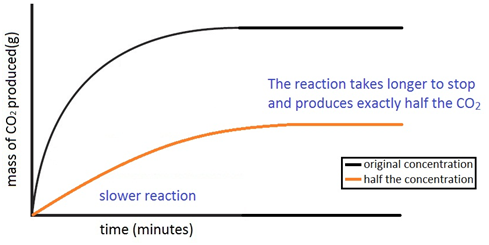