Refresh the page to get a different random selection of questions and answers.

1:15 know the structure of an atom in terms of the positions, relative masses and relative charges of sub-atomic particles

An atom consists of a central nucleus, composed of protons and neutrons.

This is surrounded by electrons, orbiting in shells (energy levels).

Atoms are neutral because the numbers of electrons and protons are equal. 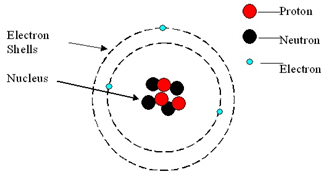 This video explains the basics of atomic structure, telling you what is inside an atom:

Atomic number: The number of protons in an atom.

Mass number: The number of protons and neutrons in an atom.

Isotopes: Atoms of the same element (same number of protons) but with a different number of neutrons.

Relative atomic mass (Ar): The average mass of an atom compared to 1/12th the mass of carbon-12.

1:17 be able to calculate the relative atomic mass of an element (Aᵣ) from isotopic abundances

In order to calculate the relative atomic mass (Ar) of chlorine, the following steps are used:

This excellent video from Tyler de Witt walks you through what isotopes are, and how the relative abundance of those isotopes can be used to calculate the relative atomic mass of an element.

1:19 understand how to deduce the electronic configurations of the first 20 elements from their positions in the Periodic Table

Electrons are found in a series of shells (or energy levels) around the nucleus of an atom.

Each energy level can only hold a certain number of electrons. Low energy levels are always filled up first.

Rules for working out the arrangement (configuration) of electrons:

2) Remember the number of protons = number of electrons. Therefore chlorine has 17 electrons.

3) Arrange the electrons in levels (shells):

Therefore the electron arrangement for chlorine (17 electrons in total) will be written as 2,8,7

The electron arrangement can also be draw in a diagram.

Electron arrangement for the first 20 elements: 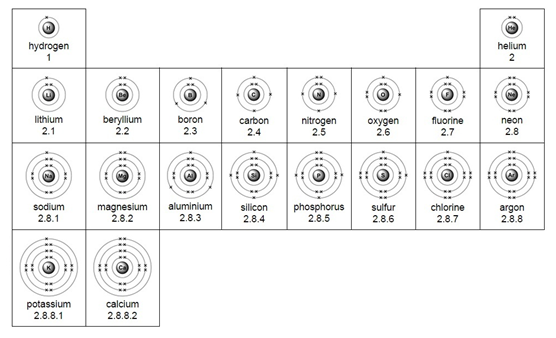 Relative formula mass (Mr) is mass of a molecule or compound (on a scale compared to carbon-12).

It is calculated by adding up the relative atomic masses (Ar) of all the atoms present in the formula.

Here’s an excellent Tyler de Witt video explaining how to calculate the relative formula mass of compounds with:

This video shows how to perform calculations involving mass (in grams), amount (in moles) and relative atomic mass:

1:31a understand how the formulae of simple compounds can be obtained experimentally, including metal oxides

Finding the formula of a metal oxide experimentally

The formulae of metal oxides can be found experimentally by reacting a metal with oxygen and recording the mass changes.

Example: When magnesium is burned in air, it reacts with oxygen (O2) to form magnesium oxide (MgO). 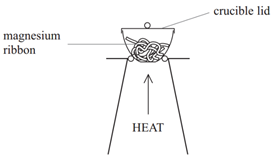 1:32 know what is meant by the terms empirical formula and molecular formula

The empirical formula shows the simplest whole-number ratio between atoms/ions in a compound.

The molecular formula shows the actual number of atoms of each type of element in a molecule.

For example, for ethane:

Here are some more examples: 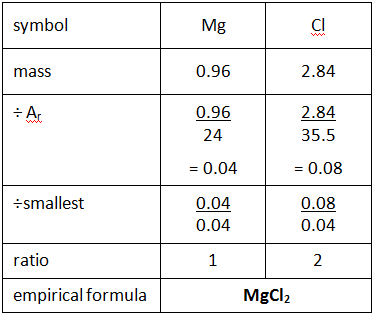 Step 1: Put the symbols for each element involved at the top of the page.

Step 2: Underneath, write down the masses of each element combining.

Step 4: Divide all the numbers by the smallest of these numbers to give a whole number ratio.

Step 5: Use this to give the empirical formula.

If you know the empirical formula and the relative formula mass you can work out the molecular formula of a compound.

Example: A compound has the empirical formula CH2, and its relative formula mass is 56. Calculate the molecular formula.

Step 1: Calculate the relative mass of the empirical formula.

Step 2: Find out the number of times the relative mass of the empirical formula goes into the Mr of the compound.

Step 3: This tells how many times bigger the molecule formula is compared to the empirical formula.

Example: If you heated hydrated barium chloride (BaCl2.nH2O) in a crucible you might end up with the following results.

Step 1: Calculate the mass of the anhydrous barium chloride (BaCl2) and the water (H2O) driven off.

Step 2: Use the empirical formula method to find the value of n in the formula. 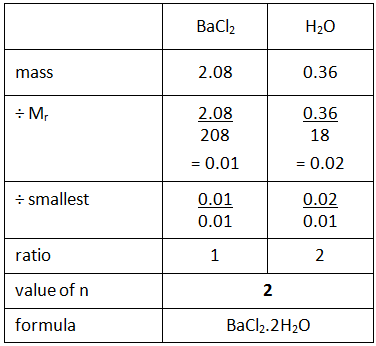 (Please excuse the horrid error right at the start where the video shows a diagram of prop-2-ene, but it is labelled ‘ethene’ by mistake.)

This second video then explains how, if given an empirical formula and a molecular mass, you can calculate the molecular formula:

1:36 practical: know how to determine the formula of a metal oxide by combustion (e.g. magnesium oxide) or by reduction (e.g. copper(II) oxide)

To determine the formula of a metal oxide by combustion.

Example: When magnesium is burned in air, it reacts with oxygen (O2) to form magnesium oxide (MgO).

It is then possible to use this data to calculate the empirical formula of the metal oxide.

To determine the formula of a metal oxide by reduction 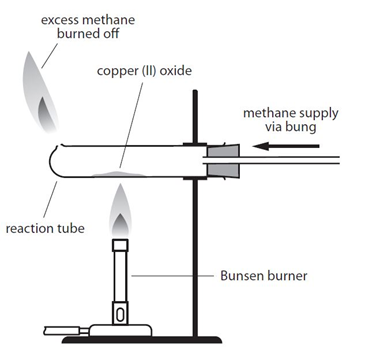 As an alternative, hydrogen gas could be used instead of methane:

It is then possible to use this data to calculate the empirical formula of the metal oxide.

There is an important safety point to note with both versions of this experiment. Both methane and hydrogen are explosive if ignited with oxygen. It is important that a good supply of the the gas is allowed to fill the tube before the gas it lit. This flushes out any oxygen from the tube, so the gas will only burn when it exits the tube and comes into contact with oxygen in the air.