8.05 describe the differences in the orbits of comets, moons and planets

Comets have highly elliptical orbits, with the Sun at one focus. When they come in close to the Sun they speed up, due to the larger gravitational force on them. They also develop bright tails that point away from the centre of the Sun. These are caused by tiny ice crystals that melt and break off from the comet and reflect the bright light of the Sun.

8.07 understand how stars can be classified according to their colour

8.08 know that a star’s colour is related to its surface temperature

8.09 describe the evolution of stars of similar mass to the Sun through the following stages: nebula, star (main sequence) , red giant, white dwarf

8.10 describe the evolution of stars with a mass larger than the Sun

After the stable period, a giant star expands into red supergiant. (It produces all the elements up to iron during nuclear fusion). When it finally runs out of nuclei to fuse it collapses due to the gravitational force, and then explodes – an exploding star is called a supernova.

The explosion throws dust and gas back into space and so another nebula is formed. A dense core remains – called a neutron star, because it is made entirely from neutrons. If its mass is large enough it can compress further to become a black hole. (Their gravity is so strong that not even light can escape!)

8.11 understand how the brightness of a star at a standard distance can be represented using absolute magnitude

Apparent magnitude is simply how bright a star appears in the night sky.

But, the brightness of a star depends on its distance from Earth and its luminosity – how much power it produces. (A dim star could just be very far away, or very close but not very luminous).

Absolute magnitude enables us to compare the brightness of stars because it is a measure of how bright they would appear if they were all the same distance from the Earth. – 32.6 light years.

8.12 draw the main components of the Hertzsprung–Russell diagram (HR diagram)

This diagram shows the relationship between a star’s luminosity (its brightness or power output) and its surface temperature. A star moves to different positions in the diagram during its life, as its internal structure and temperature change.

Important Note: the temperature scale is reversed. It is hotter towards the origin of the x axis. 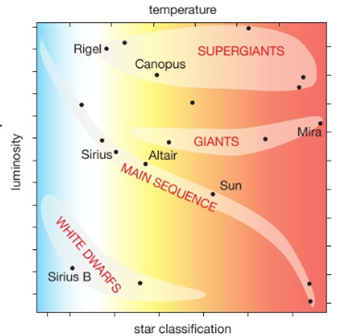