1:44 know that a covalent bond is formed between atoms by the sharing of a pair of electrons

A covalent bond is formed between two non-metal atoms by sharing a pair of electrons in order to fill the outer shell.

Covalent bonding: a strong attraction between a shared pair of electrons and two nuclei. 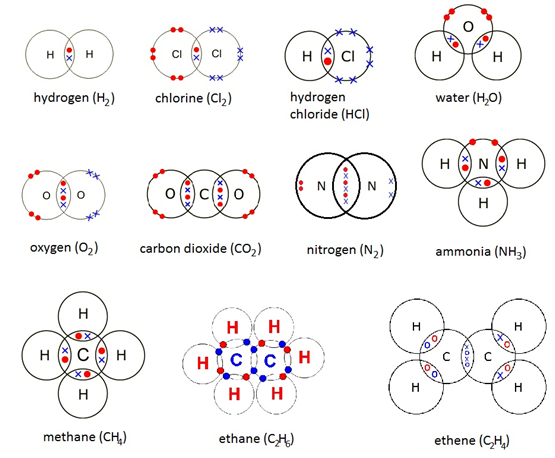 1:47 explain why substances with a simple molecular structures are gases or liquids, or solids with low melting and boiling points. The term intermolecular forces of attraction can be used to represent all forces between molecules

Carbon dioxide (CO2) has a simple molecular structure. This just means that it is made up of molecules.

Within each molecule are atoms bonded to each other covalently. These covalent bonds inside the molecules are strong.

However, between the molecules are weak forces of attraction that require little energy to break. These forces are not covalent bonds. This is why simple molecular substances such as carbon dioxide have a low boiling point.

So when carbon dioxide changes from a solid to a gas, for example, that process can be represented as:

Notice that even though there has been a dramatic change of state from solid to gas, the substance before and after the change is always made up of carbon dioxide molecules. During the change of the state the covalent bonds within each molecule remain unbroken. Instead it is the weak forces of attraction between the molecules which have been overcome.

1:48 explain why the melting and boiling points of substances with simple molecular structures increase, in general, with increasing relative molecular mass

1:49 explain why substances with giant covalent structures are solids with high melting and boiling points

Diamond has a high melting point because it is a giant covalent structure with many strong covalent bonds that require a lot of energy to break. 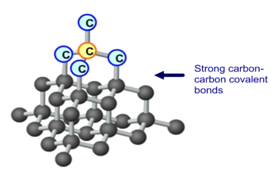 Allotropes are different forms of the same element. Three different allotropes of carbon are shown here as examples: diamond, graphite and C60 fullerene. 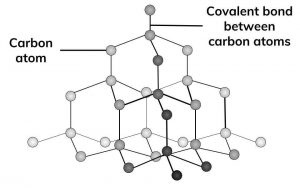 Diamond is extremely hard because it is a giant covalent structure with many strong covalent bonds.

Because it is hard, diamond is used in high speed cutting tools, eg diamond-tipped saws. 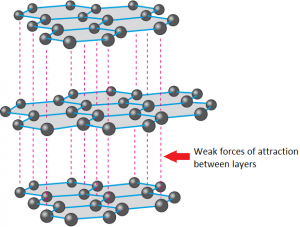 Even though it is a non-metal, graphite can conduct electricity because the delocalised electrons are free to move.

Each layer is a giant structure, with weak forces of attraction between the layers. These layers can easily slide over each other. 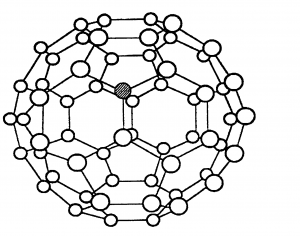 C60 fullerene which is a simple molecular structure (also known as a buckyball) is also made of only carbon atoms, but it forms molecules of 60 carbon atoms. The molecule has weak intermolecular forces of attraction between them which take little energy to overcome. Hence C60 fullerene has a low melting point, and it is soft.

C60 fullerene cannot conduct electricity. Although in each molecule every carbon is only covalently bonded to 3 others and the other electrons are delocalised, these electrons cannot jump between different molecules.

1:51 know that covalent compounds do not usually conduct electricity

Electric current is a flow of charged particles that can move.

Covalent compounds do not conduct electricity.