(b) Elements, compounds and mixtures

1:08 understand how to classify a substance as an element, a compound or a mixture 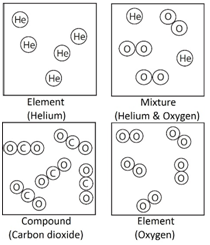 Element: The simplest type of substances made up of only one type of atom.

Compound: A substance that contains two or more elements chemically joined together in fixed proportions.

Mixture: Different substances in the same space, but not chemically combined.

Note: elements such as oxygen (O2) are described as diatomic because they contain two atoms.

The full list of elements that are diatomic is:

1:09 understand that a pure substance has a fixed melting and boiling point, but that a mixture may melt or boil over a range of temperatures

Pure substances, such as an element or a compound, melt and boil at fixed temperatures.

However, mixtures melt and boil over a range of temperatures.

Example: although pure water boils at 100⁰C, the addition of 10g of sodium chloride (NaCl) to 1000cm³ of water will raise the boiling point to 100.2⁰C.

Example: although pure water melts at 0⁰C, the addition of 10g of sodium chloride (NaCl) to 1000cm³ of water will lower the melting point to -0.6⁰C. 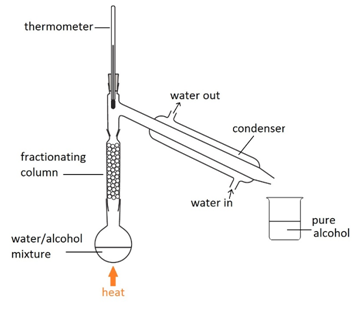 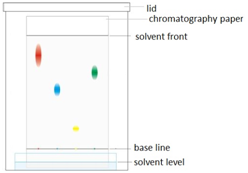 1:11 understand how a chromatogram provides information about the composition of a mixture

Paper chromatography can be used to investigate the composition of a mixture.

A baseline is drawn on the paper. The mixture is spotted onto the baseline alongside known or standard reference materials. The end of the paper is then put into a solvent which runs up the paper and through the spots, taking some or all of the dyes with it.

Different dyes will travel different heights up the paper.

The resulting pattern of dyes is called a chromatogram. 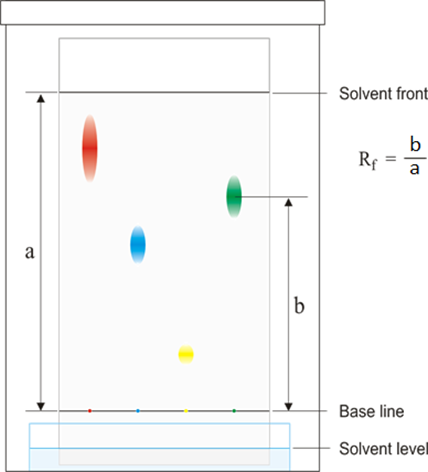 Common solvents are water or ethanol. The choice of solvent depends on whether most of the dyes are soluble in that solvent.